The Future of Office Space

After nearly a year and a half of uncertainty, the workforce looks nothing like it did before. People working from home, going into coworking spaces, a combination of both… It seems no industry is doing it quite like the other.

We got curious and decided to chat with our TCSW 2021 venue partners on their take — what have they seen in the past few years? How are they adapting? And what will the future look like? Find out here.

An increase in coworking

“Everyone is now demanding hybrid,” Robin Cardoso, Territory Vice President of WeWork, said of the return to the office model they’ve been seeing.

In a blind study conducted by WeWork, findings showed that the majority of workers want to split their time between three spaces: home, an office, and a third space — a neutral option, such as a coworking space or coffee shop.

“Everyone is requiring flexibility, employees want it and employers are giving it,” Cardoso said. WeWork, who provided free coworking during TCSW, and other “flex spaces” — a replacement term for coworking spaces — are in a unique spot to offer this flexibility.

According to a CBRE study, 86 percent of employers are now considering flex spaces instead of traditional leases on office space, and it ranges from small businesses to large enterprises. “We’re seeing across the board from startups to Fortune 500, that everyone needs flex space right now,” she said.

Another flex space destination in the Twin Cities that provided free coworking during TCSW 2021 is Wellworth in downtown St. Paul, established in 2018 in the 428 Building. Focused on being an environment that people are most productive in, the space prioritizes natural lighting and open staircases, with a view on the top floor.

“We wanted it to be inspiring and a place that brings out creativity,” Jamie Rissi, Operations Manager at Wellworth, said.

“We landed on coworking because St. Paul really has a lack of coworking spaces,” Rissi said of the decision about what to do with the top floor of the building. “Now it’s a great amenity for the building.”

After the initial shutdown, Wellworth made accommodations for those who wanted to trickle back into the space last year, such as socially-distanced desks and options to use the vacant offices. Now, with lessened restrictions, people are coming back en masse.

“People are really starting to come back, and we’re seeing a different type of member,” Rissi said, of more corporate employees and those who were formerly in an office. “Their companies aren’t renewing their leases but they want a spot to get out of their house, a place for monthly meetings, and so on.”

The prospect of members has also increased, she said. “The neighboring area around us have found us,” she added, mentioning the uniqueness of downtown St. Paul with the state government presence mixed with corporations and small businesses.

Adapting to an ever-changing space

We all had to adapt once the pandemic shut down, especially office spaces and those that supply them.

“The need for office furniture is still there, but it’s a balance of today and tomorrow’s needs, technology for in office and remote workers, and maintaining the culture of your company,” said Laura Burkart, Marketing and Brand Manager at Intereum, the only Herman Miller office furniture and healthcare dealership in Minnesota.

Based on research coming from partners and Intereum’s own experience and findings with customers, Burkart said they’ve seen a regeneration in the workplace.

“Businesses are evaluating their needs and considering how to bring people back into the office safely and comfortably, but how do you balance a new work model like many are implementing?” 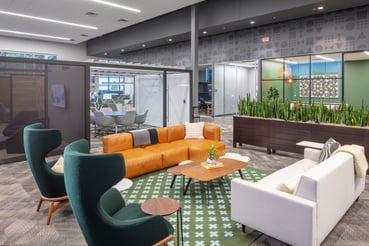 In their own workplace facility, Intereum   — who furnished the Minneapolis    Community Hub at TCSW 2021 —  reimagined the use of their space through an increase in collaborative and innovative meeting areas, presentation areas, and a reduction in dedicated workspaces for resident workers.

WeWork and Wellworth adapted through different membership models and events to

foster connection in their spaces.

The Wellworth virtual membership is hugely popular, said Rissi — especially for those just looking for an address to send mail or receive packages. The weekly get togethers and other events that were created during uncertain times are also still going strong.

“So many different connections and relationships have developed, it makes our members stronger and more committed to coming into an office because they’ve developed relationships,” she said.

WeWork now offers an all-access membership that allows members to work from any WeWork around the world, which has shown “huge advantage,” said Cardoso, as people have even just been working in different facilities in their own city.

There is also now an on-demand option at WeWork, where non-members can just pay for a day at a time and pop-in to any WeWork to work remotely for the day.

What the future holds

“I think we’re coming to the coworking day,” Rissi said, explaining that she thinks it will only continue to grow as a popular work model.

With extremes on either side, most people live somewhere in the middle, she said. “[They’re] looking forward to coming back to an office, just not every day.”

This “Work Your Way” model is what the Intereum team has been implementing for its employees, and it’s working. “If that means you work from home, then do it. If that means you’ll be in the office 3-4 days a week, then do it,” Burkart said.

Documenting the experience for employees, Intereum started this when a lot was still unknown about bringing teams back together. “We wanted to be the example of what could be done, and how it could be done, while sharing our learnings along the way,” she said.

Now, more often than not, companies are doing a similar thing. “The future is hybrid,” Cadoso said.

WeWork was founded in 2010 with the vision to create environments where people and companies come together and do their best work. They have three locations in Minneapolis - learn more here!

Wellworth is a community driven coworking space located in the heart of downtown St. Paul. The space is designed for members as a place for modern day collaboration, innovation, wellness and business growth. Learn more here!

Intereum is the only certified Herman Miller office furniture and healthcare dealership for Minnesota. Originally founded in 1980 as Facility Systems, Intereum was formed in 2004 with the merger of WorkXite. Today, they specialize in furnishings, audiovisual solutions, architectural products, and provide robust services to bring people together – whether that’s at work, at home, or on the go. Learn more here!

Behind the Scenes: What a Hybrid Event Looks Like

Spread the Word: Stories of Innovation from TCSW

Twin Cities Startup Week is the time and place where we gather to see the incredible innovations being built right now in our ...
Start Reading
Dec 13, 2021 9:17:42 AM

The power of the TCSW Fly-In Program

The Fly-In Program at Twin Cities Startup Week started as a question — if we flew in people from around the country to explore ...
Start Reading
- All rights reserved.